A journey through Sertã's gastronomy

There are many gastronomic options in this region, which is proven to have delicious snacks, here is one brief trip through Sertã's gastronomy and its most characteristic dishes.

We start obviously in Maranhos, whose origin in the municipality takes us back to the 19th century. Your way of preparation it requires knowledge and experience, given the specificity of the recipe. Wash the lamb/goat belly with boiling water, shaving very well. Cut into pieces, which are sewn with a thread in order to obtain bags. aside, mutton/goat or kid, chorizo, ham and lots of mint are mixed in very small pieces minced. Season with salt, pepper and white wine, and stay like that overnight. The next day, they fill up up to half a sack, after having mixed the raw rice well washed. Put them to cook in water with salt and mint, after closed the openings with needle and thread.

The second delicacy is Bucho Recheado, brought to the municipality by people from Sertagin who harvested in Alentejo. However, they refined the recipe in a different way: the meat is cut into pieces, seasoned with garlic, salt and white wine. It is sauteed with chopped onion, olive oil, oil and margarine, cloves, a bay leaf, a sprig of parsley and a clove of garlic. After the meat is sautéed, mix the meat and let it stew, when it starts to brown, the marinade is mixed. Cover the pot and let it cook. If it starts to dry, add a little white wine or water. Then the cooked meat is taken out, the rice is cooked where the meat has been stewed. After the rice is cooked, well opened, the pan is removed from the heat and the bread is mixed, finally the eggs are well beaten. Go back to the fire to boil the eggs, stirring constantly so as not to catch. At the end of all this, mix the chopped parsley, orange and lemon juice. Fill the pork belly, previously washed and dry with a cloth, not too much to avoid bursting. Sew the openings with the needle, chop two or three cloves of garlic, a little paprika and a little oil. The tripe is rubbed with this preparation and it is toasted in a very hot oven for about half an hour. It is pricked with a needle so as not to burst.

For stronger stomachs, we suggest the Grain Dish with Pasta. Nothing is easier to prepare: the day before, put the grain soak and the next day cook the chickpeas with pork and chorizo. When the meat and grain are cooked, remove the meat and the chorizo, which are cut into pieces, going again to mix with the grain. Right after that, the rice and the pasta are added, letting it cook again, being served immediately.

Reference also to the Cacholada. This accompaniment, also called sarrabulho, is typical of the time of killing the pig. Cut the entretinho (veil that wraps the guts) and the animal's liver into pieces, seasoning only with salt. Put oil in a frying pan, fry the entretinho and then the liver. Take it out, chop the onion well finely chopped and browned in that fat. Pig blood that has already been cooked is crushed with your hands and mixed with the onion. Season with salt to taste. Serve with fried pork steak, black pudding, spare ribs and a baked potato and vegetable. On the platter, it is placed in piles.

In the fish section, we highlight the Rio Fish Stew à Moda da Foz da Sertã, a very characteristic recipe of this area of ​​the parish of Cernache do Bonjardim. Right away, put all the seasonings in a pot or pan that goes on the fire, let it cook very well, until the onion is golden. As soon as the stew is ready, add white wine until it boils, adding even a little water. In this prepared sauce, the fish is cooked, removing it as soon as it is cooked. Then, thinly slice bread into the same sauce, stirring everything until the bread breaks a little. The fish will serve with this stew.
From the same region is Peixe do Rio in Escabeche sauce. To start with, you need to arrange the fish, scale it and remove it the viscera; then rinse in clean water and season with salt. In a large frying pan put oil and a little oil, let it warm up well; pass the fish through wheat flour and fry. In the sauce where the fish was fried, put onions at slices, minced garlic, some bay leaves, a pinch of salt and spicy to taste, after browning, add vinegar and let it boil a little longer. Pour this sauce over the fish that has already been fried in advance. go to the table hot or cold accompanied with boiled potatoes and salad.

For starters, we highlight the Bread Soup. Its way of cooking is not difficult: bread is cut in chips and overlaps layered on a soup plate. In a pot, put a chorizo ​​sausage in water tempered with salt. Once cooked, cut thinly sliced ​​and put on top of bread soups, as well as sprigs of mint. Finally pour water
boil, over the soups and cover the container for a few minutes.

Those with a sweet tooth also have plenty of reasons to come to Sertã. Cernache Almond Cartridges are the star of the company. To make the dough, place the flour in a bowl. On top, pour the melted butter. Then add one egg at a time. Knead everything very well. Roll out the dough, cut into squares.
The forms are lined on the outside in a cartridge shape, brushed with beaten egg and sprinkled with grated almonds on the machine, but it gets thick. Go to the oven to bake. For the filling, it is necessary to pour 4 dl. of water in a pot together with the sugar, and let it boil until it becomes a splash point. Add the grated almond. As soon as it boils, remove from heat, let it boil, until it thickens. (The fire must be low and it goes on stirring constantly). with this stuffing the cartridges are filled and ready to serve.

The Sweet Meals are another typical dessert in the area, although their preparation is very confined to the months of October and November (time of the saints). However, nowadays it is already possible to find them for sale outside that time. The preparation requires a lot of attention: the flour is kneaded with a little hot water (where the salt is added). Add the fennel, cinnamon and yeast, which dissolves with a little hot water and flour, before adding the dough. Knead it well, leave it after resting for a few hours, in a sheltered place, until it is thin (leavened). Warm up the oven (generally not as hot as the bread). Snacks are tended, spread over the top with egg yolk. Put them in the oven.

For those who want to taste some of these dishes, the restaurants in the municipality of Sertã are an excellent option.

If you prefer more information about these and other recipes, be sure to visit the site
http://www.sartagografia.pt/index.php/sociedade/gastronomia 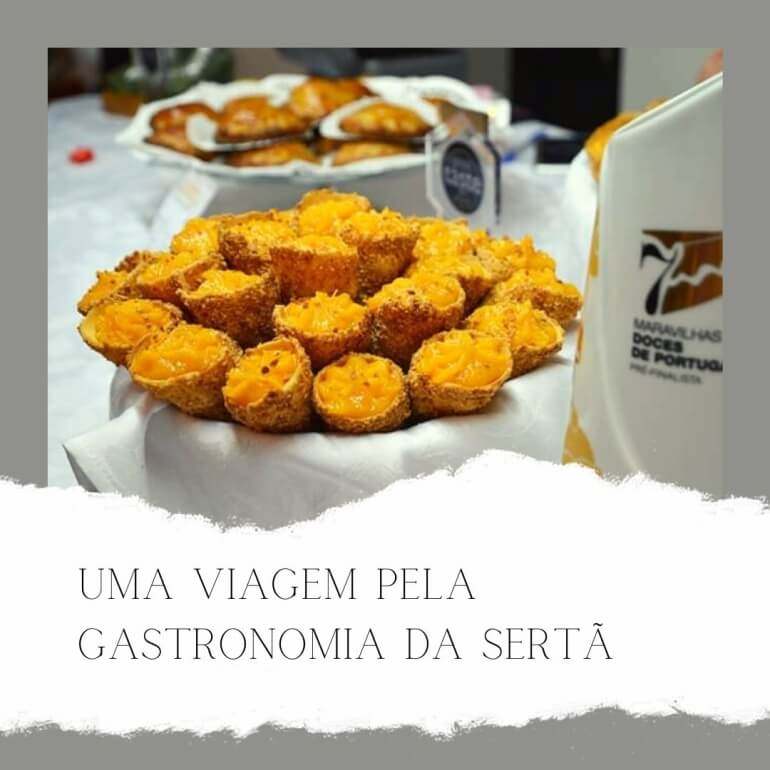